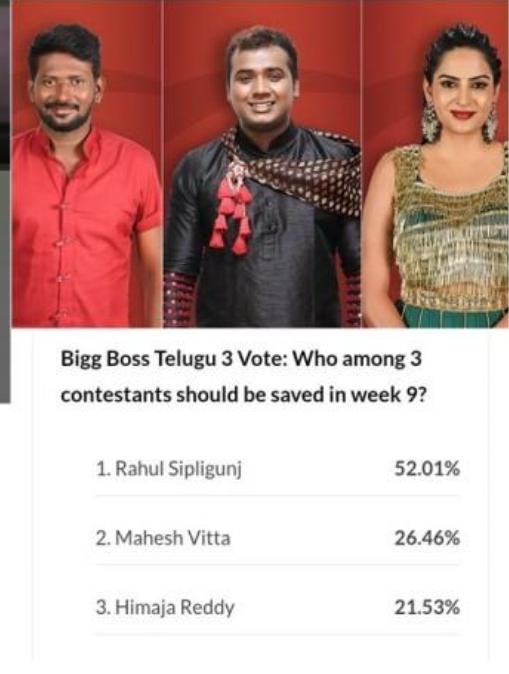 This week in Bigg Boss Telugu Season 3, we had seen Rahul Sipligunj, Himaja Reddy, and Mahesh Vitta make their way in the nomination list.

Himaja was nominated by Vithika by using her power as the captain of the house.

In the ninth week where the competition is very tough Rahul Sipligunj, a playback singer getting huge support from the audience.

Within less than 24 hours Rahul Sipligunj almost received 52% of votes from the audience, whereas Mahesh Vitta received 26% of votes and Himaja Reddy received 22% of votes. (This data is taken from International Business Times)

One of the reasons why Rahul had received a huge percent of the vote is Rahul is from the PVVR gang (Punarnavi, Varun, Vithika, and Rahul) and this group is receiving a huge fandom in outside world.

The gap between Mahesh and Himaja is not huge, the gap can easily be recovered in the given time (i.e in the next 5 days).

There had been many surveys by different online websites and undoubtedly Rahul Sipligunj is leading on all the websites.

By seeing all the polls on various sites we can conclude that Rahul is safe from eviction this week.